June 15, 2012 was a dark day for the settlement of Ramwapur, Banke District. A fire, fanned by high winds, spread rapidly through the small village of thatched houses, destroying homes, food grains, livestock, and even taking a life. Most residents here are agricultural laborers, or rickshaw drivers. The fire devastated their assets and possessions, gutting 47 houses. The survivors were left with only the clothes on their backs.

With coordination from the community-based network organization Janajagaran Samaj, people from other nearby settlements and villages immediately responded by giving clothes and food to aid the fire-affected community. MCC, through its partners Janajagarun Samaj and Sansthagat Bikas Sanjal, provided housing materials including bricks and cement, so that residents could build fire-resistant homes to replace the ones that burnt down. MCC also provided new school uniforms and textbooks to children in the community so that they could continue their studies with minimal disruption. All community members worked together, taking turns to build each other’s houses.

I visited Ramwapur again in December 2016. The houses look like homes again, with flowers, fruit trees and vegetable gardens growing between the houses. Yet memories of the tragic fire are still strong. Ramwapur residents remember what it is like to lose everything in an instant, and they know what a difference it makes to receive aid in a time of need.

When central and eastern Nepal were hit with a devastating earthquake in April 2015, this community was quick to respond. All households gave whatever they could, whether two kilos of rice, or some oil. Janajagarun Samaj facilitated collection through its network of community organizations, including from Ramwapur. In total, residents of Ramwapur and seven other villages in the area sent nearly two metric tons of rice and foodstuffs to earthquake survivors in the immediate aftermath of the quake.

It’s inspiring to see how residents of Ramwapur have transformed from being homeless fire victims to to generous donors that give to others in need. Radical generosity in action!

A Ramwapur man carries bricks for rebuilding his house, January 2013. MCC, with partners Janajagarun Samaj and Sansthagat Bikas Sanjal, provided materials including bricks and cement so that the homes destroyed by the fire could be rebuilt in a hazard-resistant way.

Mina Bediya stands in front of her house, rebuilt with support from MCC following a devastating fire in 2012. She is the chairperson of the Ramwapur community organization and a board member of Janajagarun Samaj. She was part of spearheading efforts to collect food for earthquake affected areas of Nepal in April 2015. 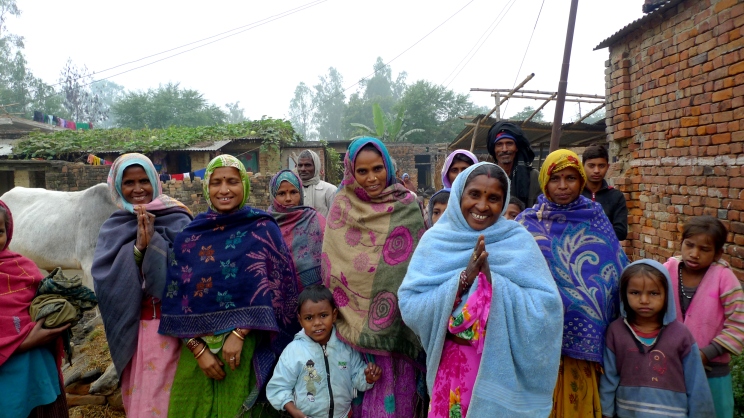 Some residents of Ramwapur greeting MCC and partner staff, December 2016. They’re thankful for the rebuilding support they received after their homes burnt down in 2012, and gave what they had to support earthquake survivors in 2015.